All of the 9 scabbards with the exception of Denjiro are able tell that Kinemon legitimately thought that the meeting port was "Tokage" so they ask Kinemon to spill the beans, saying they won't get angry as everything ended up alright in the end. Kinemon then acknowledges his goof and says that he's probably used up all of his luck in life so he just might die here as a result. The other red scabbards then reply to Kinemon saying that it wasn't only him, and that all of them also used up their luck, so if he dies, they all die together.

Kanjuro says that for now what he must do is find and kill Hiyori if she somehow happens to still be alive and then escapes kidnapping Momo.

Momonsuke sees the Samurai in a panic trying to save him but kills his urge to ask for help because that is exactly what the enemy wants and then says he will find someway to escape somehow and then take both Kaidou and Orochi's heads himself.

Luffy however sees through Momo's ruse and then tells him that they are friends, so he'd definitely save him so he should try to survive somehow.

-Kanjuro draws a crane to fly 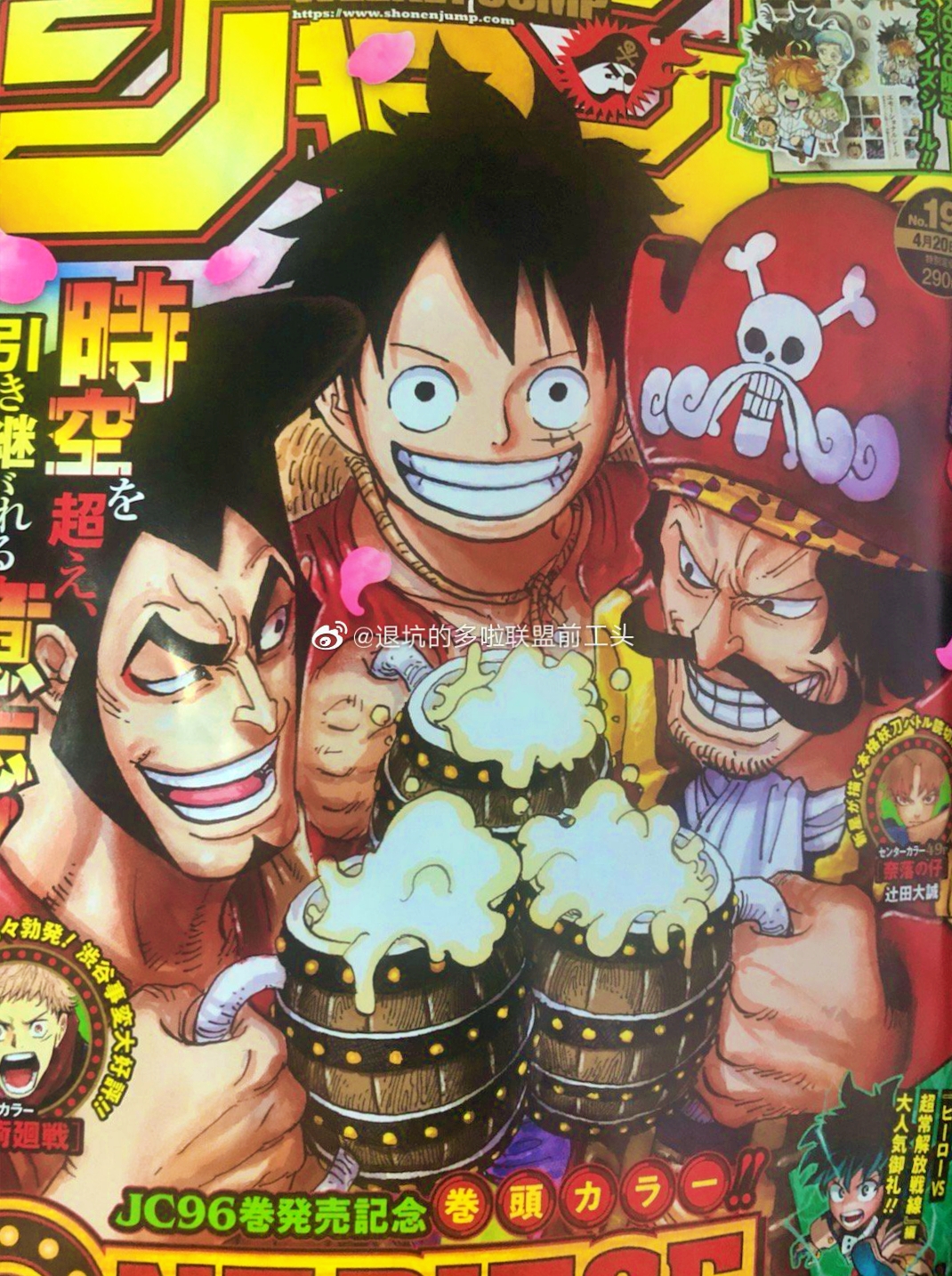 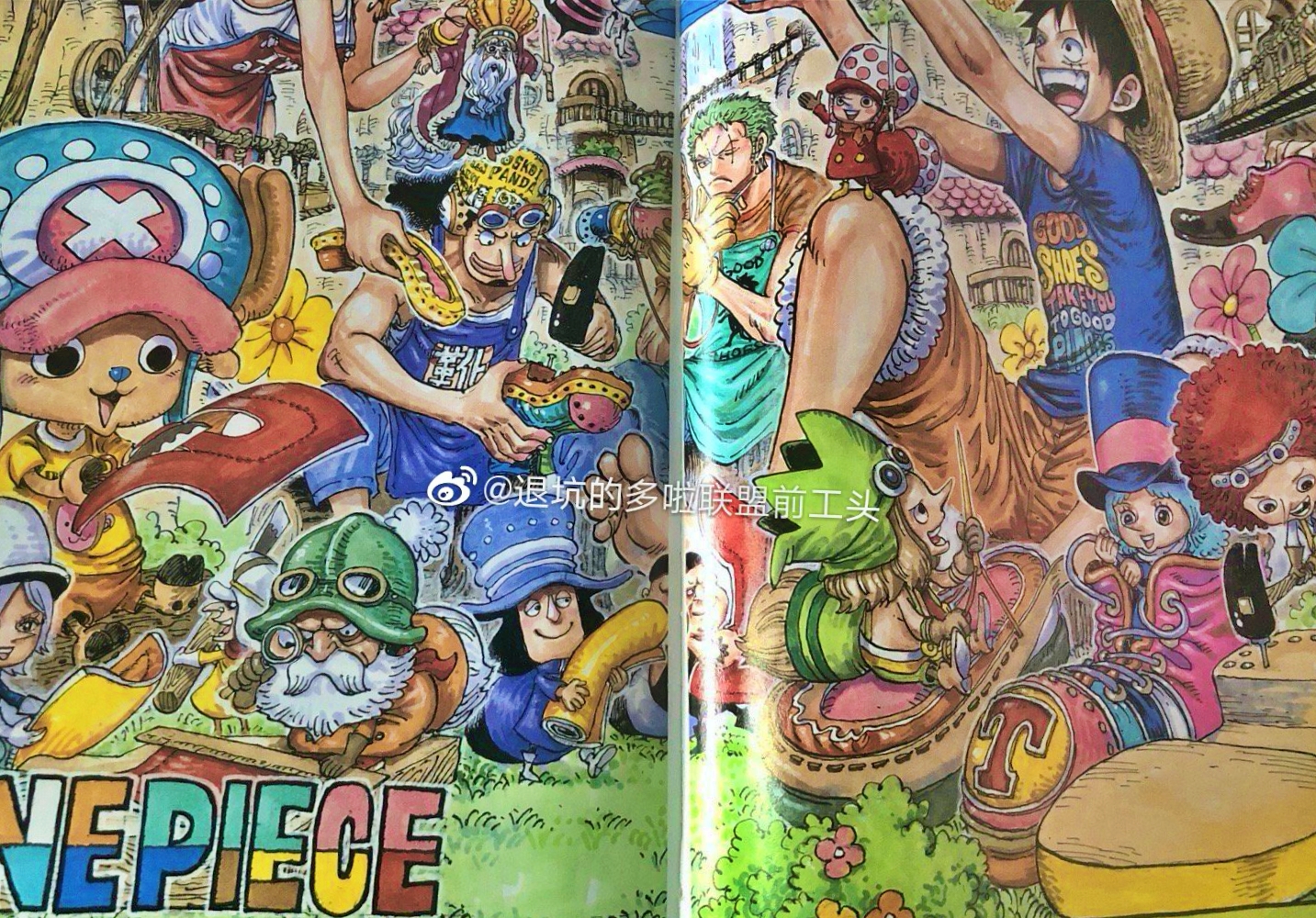 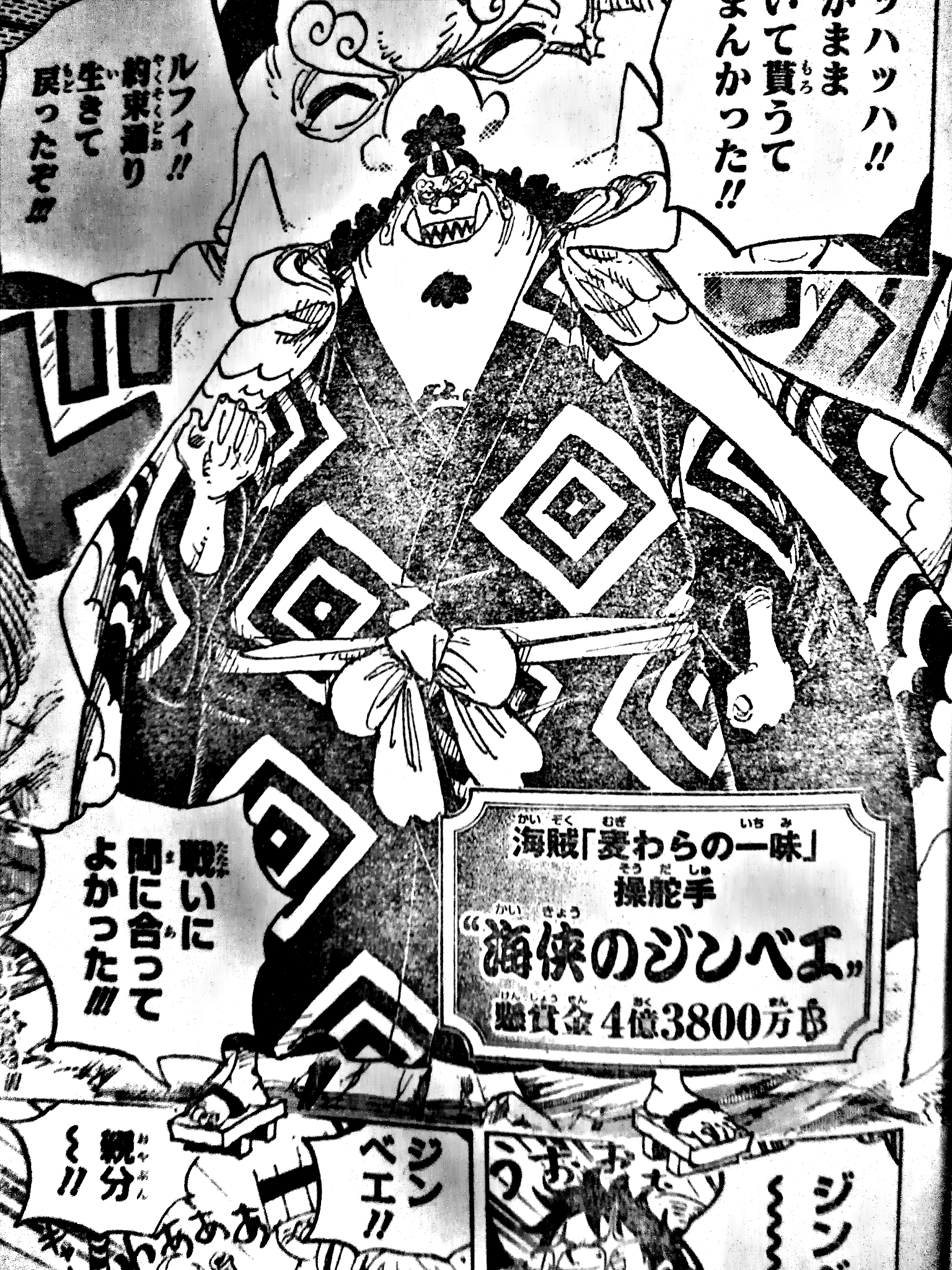 -We see a scene of Kin'emon's lie having been exposed

-Ashura tells him that if he dies, they all die together

-Kanjuro summons a bird and escapes through the skies with Momonosuke

-Luffy gets to know about Kajuro's betrayal and gets angry

"I will definitely go and save you!! We are friends after all!!" says Luffy 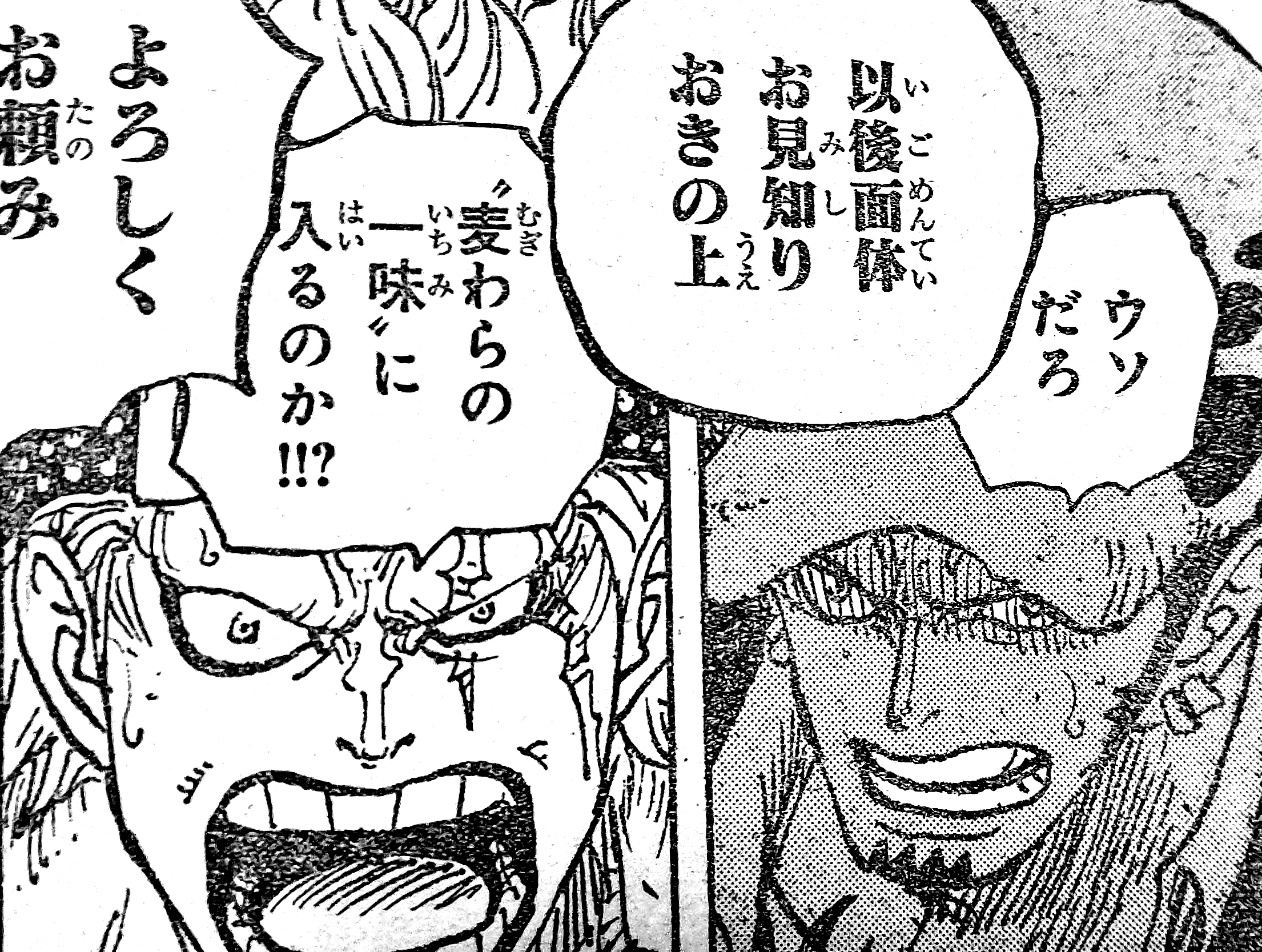 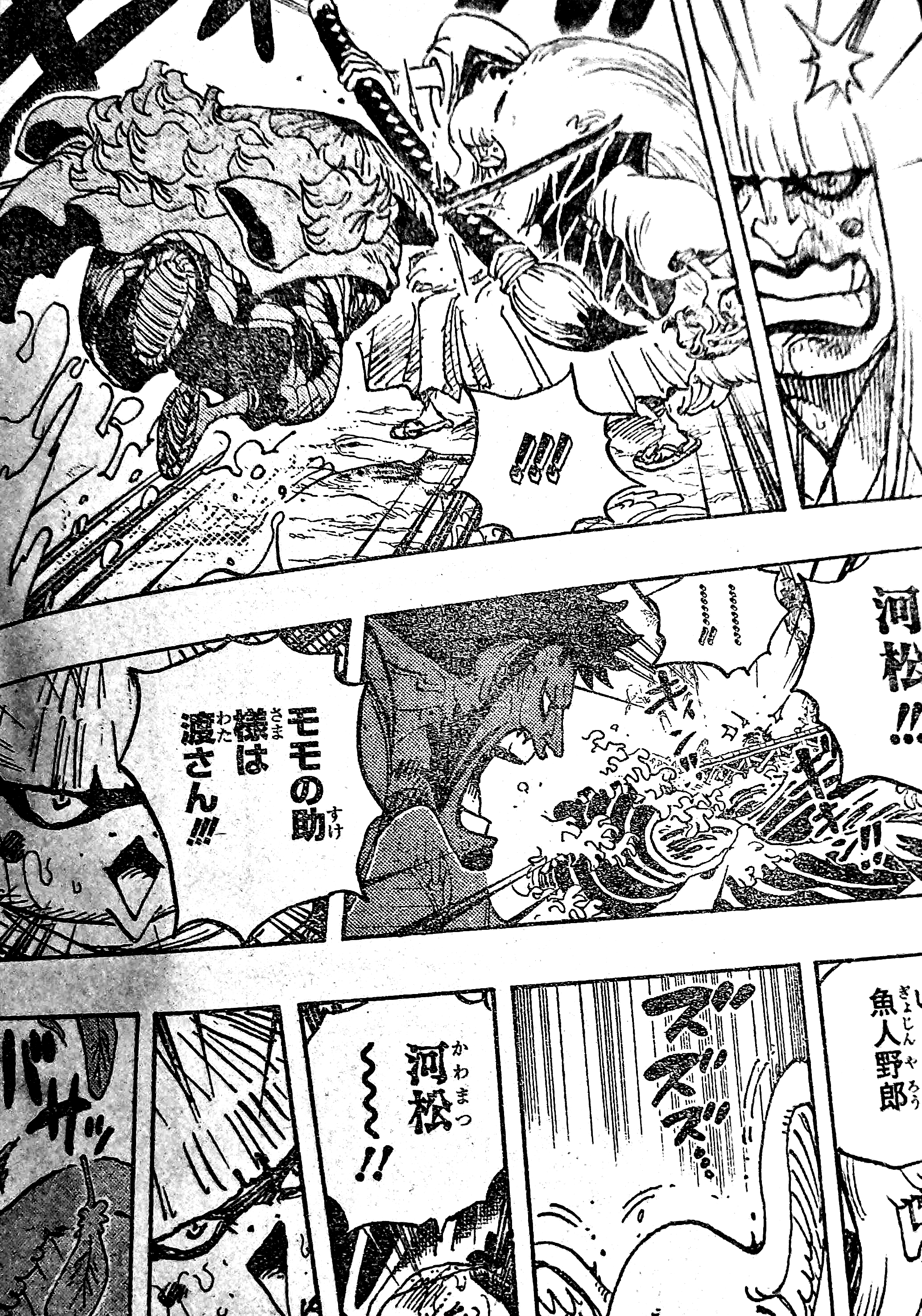 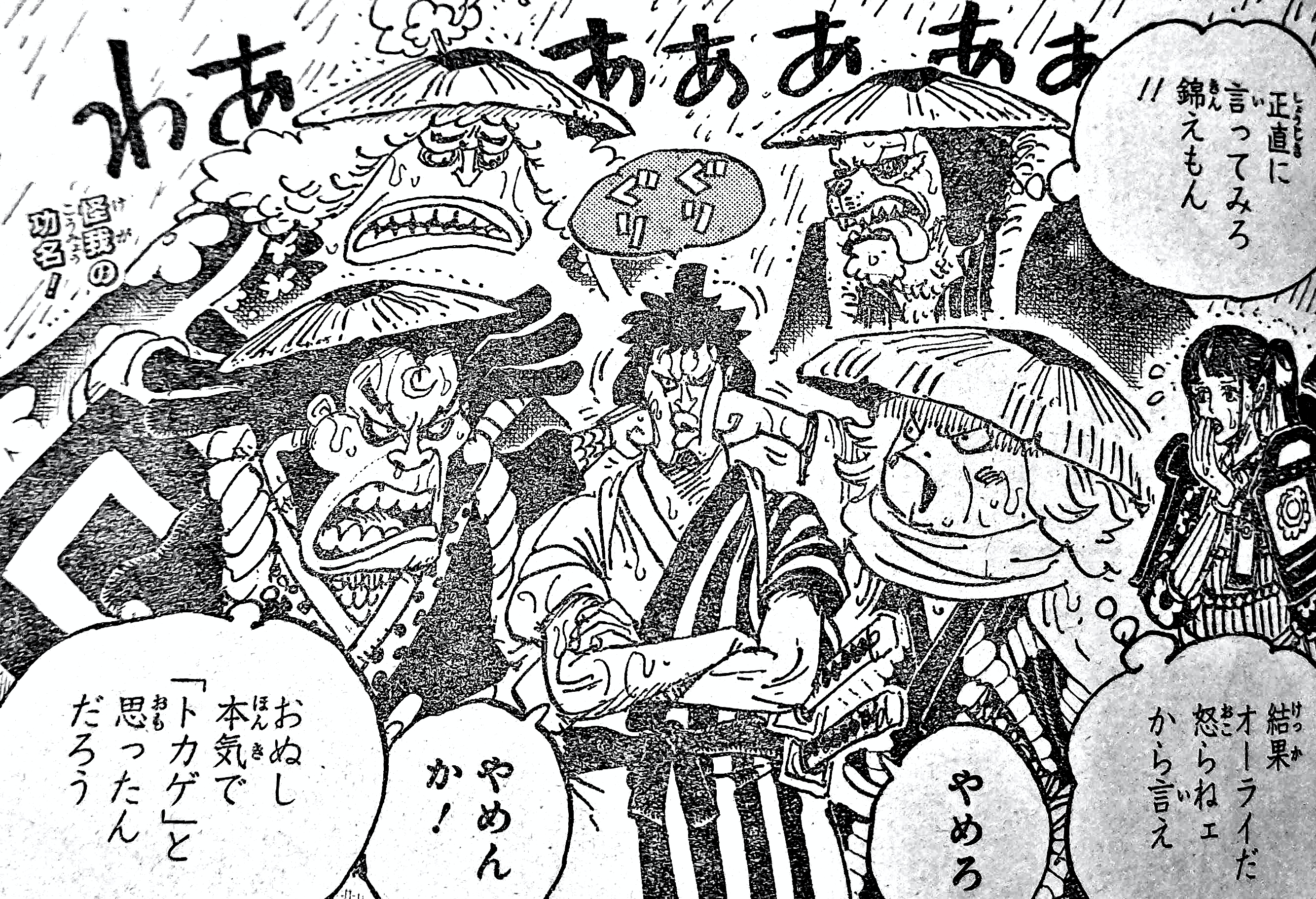 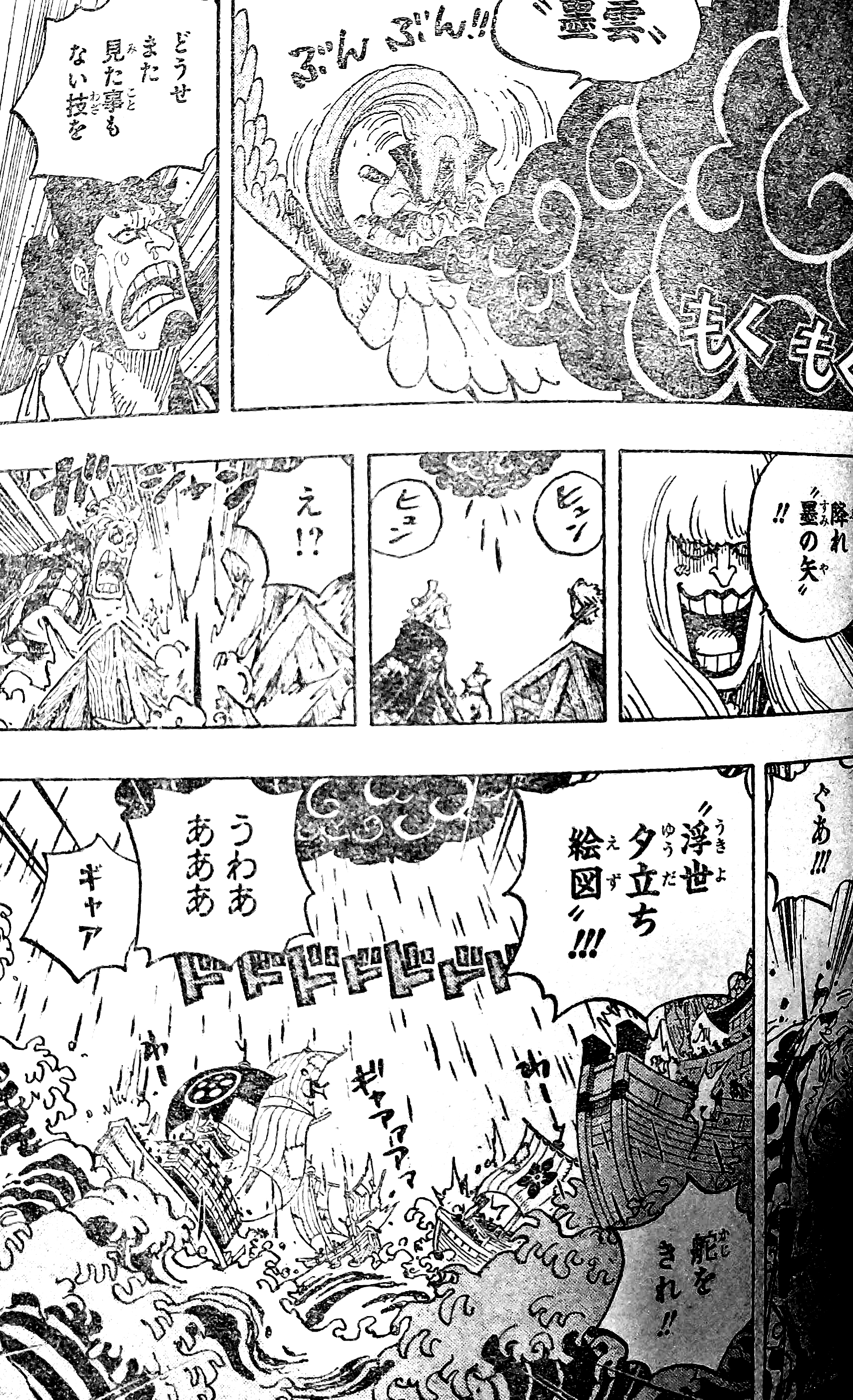 Jinbe: Luffy!! As promised I have returned to you alive!!!

Jinbe: I’m glad I’ve made it in time for the battle!!

Law: You've gotta be kidding me!!

Jinbe: I look forward to sailing with you all from now on.

Kid: You're going to join the strawhats?!!

Kawamatsu: It's all well and good in the end so I won't get angry so just say it!

Raizou: You honestly thought that it was Tokage port didn't you?

Kanjuro: "Illustration of the evening showers of the fleeting world"!!!

Law: Oi~! My ship isn't a garrison for you samurai!!

Inuarashi: We are in your care

Law: I have no intention of taking care of you! Get off my ship already!!

Kid: Don't fall behind the strawhats!!

One Piece Chapter 976 Title : "We will uphold our duty"

Kawamastu: Everything ended up alright in the end, so I won't get angry, so say it!

Raizou: You honestly thought that it was Tokage port didn't you?

Kin'emon: I might actually die in this battle today. I feel like I've just used up a life's worth of luck.

Ashura: But all our our luck also got used up because our hearts are one with you.

Kiku: When you die, I won't allow you to die alone

Ashura: We were all born and brought up in different places but when you die, know that we die together

Kin'emon: Hearing that from you shabby guys doesn't make me happy at all.

Kin'emon: Let's accept this fate together and dispel all of the regret that was left behind by Oden~sama.

All the Samurai: Yea!!!! Kin'emon~dono, we will definitely change Wano!!!


Beast Pirates: Those are some insane numbers~!

Beast Pirates: Doesn't matter how many they are, we have a battleship on our side and the other side are just ferry boats

Kanjuro: "I have to report this... " "I've accomplished my mission" "I only have one more thing to do now"

Beast Pirates: Have you already got in touch with Onigashima?!

Beast Pirates: I did but there's no answer. They're are probably all just absorbed in the excitement of the feast.

Kanjuro: I'll drag you along with me as well you fish-man bastard

Kanjuro: The Kozuki clan has already met it's end

*Kanjuro summons a bird that looks like a crane*

Kanjuro: I'll also hunt Hiyori down and put an end to her

Kanjuro: I now know that she's alive after all

Kin'emon: Damn I'm pissed! To think you could draw a bird that can fly so elegantly

Kin'emon: We've never seen you draw a bird that wasn't ugly and dripping with water before

Kanjuro: Regardless, at any rate, the likes of you lot won't be a match for Kaidou~sama's army.

Kanjuro: You won't even be able to get into Onigashima *kakaka*

Momosuke: Please let me down~!

Momonosuke: It's scary! someone please~!

Luffy: Oi~! where are you going? Kanjuro! Momo!

Yakuza: Return Momonosuke~sama to us at once~!

Sanji: It's okay if I assume Kanjuro is the spy right? Robin~chan

*Sanji sets off to the skies using his Moon Walk*

Robin: Seems like it. We have to save him.

Chopper: Luffy~They are saying Kanjuro was the spy!! Momo will get taken away!

Luffy: Is that true?! Since the very beginning?!

Usopp: I'll shoot him down

Sanji: Huh! What the hell is this cloud?

Kin'emon: I have a bad feeling about that cloud

Kanjuro: "Illustration of evening showers of the fleeting world'"!!!

Kin'emon: It's probably another of his techniques that we've never seen before again

Kanjuro: Rain down on them! Ink Arrows!

Momonosuke: Please I beg you, stop it Kanjuro, everyone will die

Kanjuro: That's exactly right. Everyone will die at long last and with your father Oden...

Kanjuro: Your mother Toki dangled hope in front of their eyes and extended their time of death by 20 years.

Kanjuro: However, the general of those hardy samurai is...an empty coward of a kid that is scared of heights.

Momonosuke: I'm the one that most understands the (painful?) reality that I am not Kozuki Oden.

Momonosuke: More so than anyone else

Momonosuke: Everyone, can you hear me!

Momonsouke: Everyone, don't worry about me! That is exactly what the enemy wants!

Momonosuke: I will escape this predicament by myself, so I'd like everyone to defeat Kaidou and Orochi and protect Wano Country.

Momomosuke: *Internal Dialogue Start* (What do I do...It's impossible for me...)


Samurai: *Overwhelmed* Such divine words from one so young...Momonosuke~sama!

Luffy: To think some like you just said that. You just showed me a very manly side

Samurai: Who is that bastard?! Hack him down to pieces!

Luffy: Find a way to survive somehow. I'll definitely go to save you! We're friends after all!

*Momo balls is eyes out and nods his head several times*

Franky: One of the ships is running away

Luffy: Doesn't matter, we are going the same way regardless

Samurai: We have a few injured and some ships that have become unusable. Let's hurry and disembark on the island. I can't think of dying on the sea as anything but regret.

Shinobu: Sorry Kin~sama. I was with him but...

Kin'emon: More than anything else, I'm glad that you are unharmed

Kin'emon: I presume that Momonosuke as well won't get his life taken so soon.

Raizou: You! What happened to your face?!

Kyoushiro: A lot happened. I'm glad I'm able to meet you all.