Law attempts to collection Luffy and escape, but he is hit with a nail made of Seastone, sealing away his powers. Hawkins explains that Seastone, which has spread out through the world, was born in Wano Country and the only craftsman skilled enough to refine Seastone so small exist only in Wano Country. While still knocked out, Luffy still scowls at Kaido. Kaido orders his subordinates to throw Luffy in prison.

Kaido: "If we can break his spirits, then he can become a fine military power for us."

As all of the subordinates close in on Luffy, they all suddenly begin foaming at the mouth and collapse.

Shutenmaru: "That was Lord Oden's power just now... Did that guy do it!?"
Kaido: "So you too... that brat, Kid, had that same Haoshoku Haki... Hardly anyone can use that Haoshoku."

Kaido puts off the retrieval of Law and flies off in order to start drinking again. While Law was stuck with the Seastone nail, a single person was able to successfully escape. In Okobore Town, Tsuru is attending to the wounded. Kinemon watches over her from the shadows. Kinemon is suprised after he sees Shutenmaru, who has gotten to close to his side.

O-kiku arrives at the remains of Oden Castle and discovers a large pit. Inside the pit are Nami and the others. Shinobu can make whatever she touches mature with her "Juku Juku Bewitching Jutsu", and she was able to protect everyone by maturing the ground and making it sink.

Inuarashi discovers Tama barely breathing in the wastelands. he lays bare his anger at Kaido's actions. A special issue paper is being distributed throughout Wano Country. Ussop, Franky, and Robin read it with a horrifying speechless expression.

The next day in Wano Country, several samurai are being worked like slaves in a factory in Udon. A single guard approaches a cell with a poisonous fish and peers into it. The cell is dark, and you can not see into the farther areas.

”Well, '4 poisonous fish a day' and 'boneless fish.' Those two were the only things decided on."

The guard absentmindedly puts the fish in the cage without removing the bones.
A chained Luffy carries it back. Luffy draws his attention, and a bone from the poisonous fish goes flying and stabs the guard in the neck. The man, who's collapsed to the ground with blood running from his neck, asks what's in this cage, but nobody knows. Luffy has also been put in this cage. Kaido's subordinates laugh loudly that Luffy is being put hard to work until his spirit breaks. Inside the cage, a similarly ragged Kid resides.

The stage curtain falls.
End of Act 1 of Wano Country. 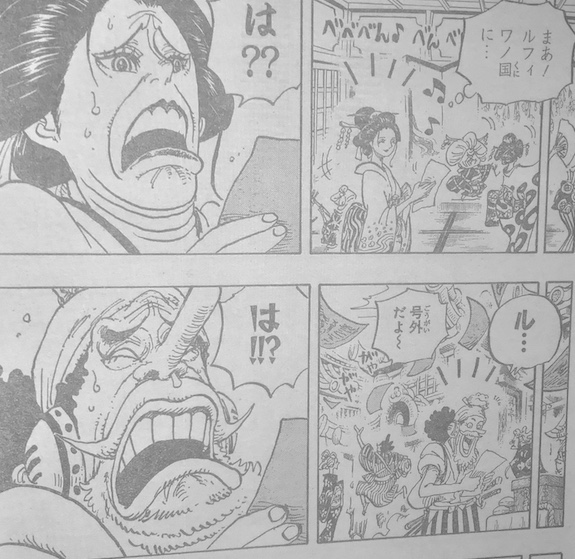