Chapter 598, Page 104Edit
SBS61 Header 3
D: Greetings, Odacchi sensei. Good afternoon(?). This is a question, but the marks on the hat Portgas D. Ace was wearing; do they mean:

☺: Meeting Pops, Luffy, and loving me so much, I'm glad I was born. Thanks.

...or something like that to indicate Ace's question and the "Answer" he found? No, it's gotta be that! When Ace said his quotes before dying, his expressions were the same as his hat. P.N. Nara's K(Kuuki) Y(Yomeru) (Can read atmosphere)

O: Hmm, I see. I've received quite a number of postcards on this one. Those "marks" and "the last expressions", hm. They are the same. I, also, was shocked when I had this pointed out at first. (Haha) What's funny is that much to coincidence, that happened to become true. Back then, when Ace made his first introduction, there was sort of an idea of what this dude's destiny would be inside me, but those marks were just plain old accessories, and so I never thought of a deep meaning. And the expressions of Ace when he was dying, well I just thought that would be relevant and drew those two panels next to each other. Realistically, the face of pain, burning, hurting, feeling bad, and not wanting to die. Still, the feeling of having no regrets. He probably tries to tell that is how he truly feels to Luffy. And that's what his smile is. When a person cradles a crying baby, he/she always smiles, right? Same as that. Because he wants the person to smile, he dies with a peaceful smile in the end, and I think that shows us his kindness. Thinking that, I drew those panels. Ah- the explaination got kinda long-. Well anyhow- it's amazing, how you all notice this stuff.

D: Tell me why do conveyer-belt sushi restaurants have to rotate the sushi around. P.N. Marukoh the Phoenix

O: Oh, I think it's the same as the rotation of the ages. 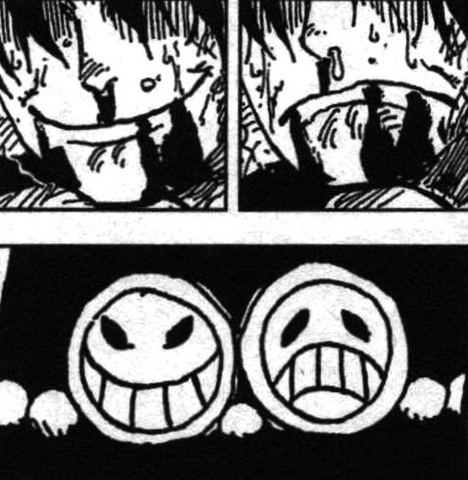 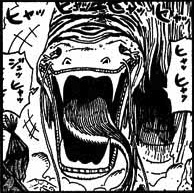